Susie followed up her first Style School session with this update to a dress she already owned.  She realized that a dress in a deeper color would be a better balance for her — deep berry, teal or hunter green perhaps.  But this tan one was right there in her closet, and she could improve it a good deal just by  …

…  adding a narrow black belt that carried the color of her shoes up to the waistline and and related both of those points on her figure to her nearly-black hair.  Now a viewer’s eyes would move up and down among those color accents in a slimming, elongating direction.

Because her torso is relatively short, the skinny belt is more flattering that the wider one we simulated in the middle image, that takes up too much of the real estate between her waistline and the bottom of her bra. 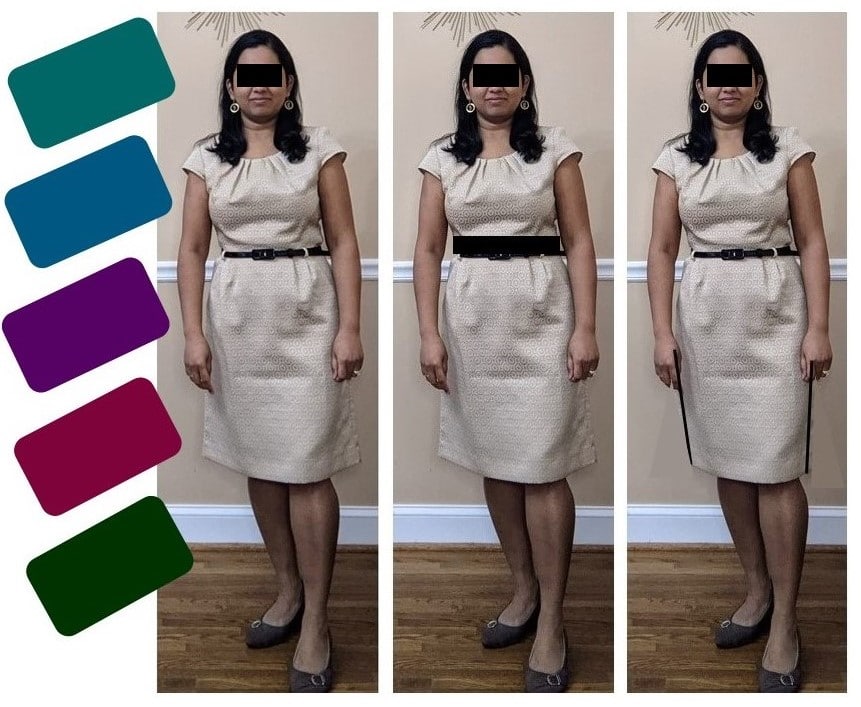 After the second session, she took another look at the same dress and realized that having the side seams tapered by her dressmaker gave the whole garment a more flattering proportion and classier look overall — for a minimal investment.

In the third frame, I’ve added dark lines along the new sides seams so you can easily discern the skirt shape from the similarly colored wall behind her.  Amazing how the narrower silhouette pushes attention up toward her face, isn’t it?

What ho-hum wardrobe items could YOU elevate a notch or two … or more?