In my  video on the Craftsy.com e-learning platform, 3 models helped me demonstrate the factors that determine any woman’s optimal wardrobe colors. After the rush of the taping was over, I had a chance to create full Color Fans for each of them … and thought that seeing the results could help YOU evaluate color swatches you may have from a previous consultation.

The goal of color advice is to showcase the individual woman – to have the outfit and the person blend into a single unified visual composition.  It’s the difference between “What a great dress”  and “You always look so fabulous”.  So the ultimate test of  color recommendations is the degree to which the resulting swatches actually look like the woman for whom they are designed. 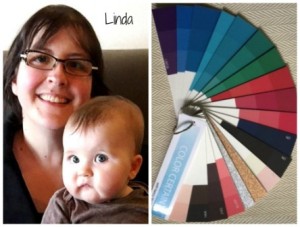 So here’s Linda.  If you can take 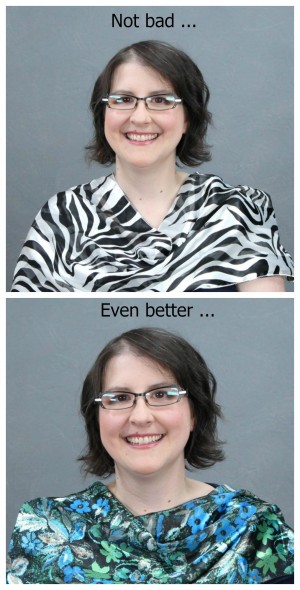 your eyes off that adorable baby,  you’ll notice her  very cool (non-golden) coloring and an element of gentleness to her look despite the high contrast between her very dark hair and eyes and her pale skin.

In the comparison here, see how the black and white is too high contrast even for Linda’s pale skin and dark hair and eyes.  The blues and greens in the second print allow your focus to go toward her face more readily, and away from the fabric.

Her Color Fan is full of the so-called jewel tones – but each of them is softened just a bit from its strongest version.  Her bright blue is a good example.  It is clear and saturated, but not the very brightest version – not what you might call “electric blue”.

She can wear black adequately, but her very most effective neutrals are dark-dark and utterly un-golden (ash) browns and clear navy blues.  And her best “white” options are a gentle pearl or winter white and a pale blush similar to her skin tone. Her best metallic option is silver, and rose gold emphasizes her lovely skin tone. 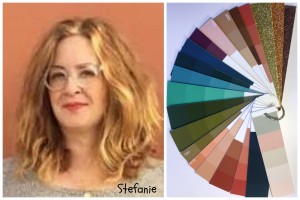 Stefanie’s coloring is much 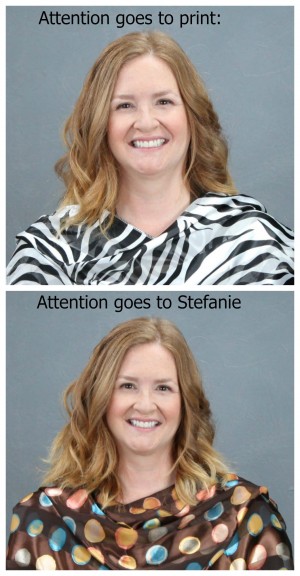 warmer (more golden) and rather subtle.  There is less contrast in her personal color pattern. Can you see those same traits in her recommended color range?  In the example on the right, the black and white pattern utterly overwhelms her subtle coloring while the soft teals, corals, buttercream and warm brown direct your focus right to her face.

Each of the colors in her fan echoes those golden and subtle characteristics – peachy and rusty reds, olive-y greens, teal-y blues, plum-y purples.  Her dark neutrals are golden browns related to her hair and navy with a hint of teal. Her “whites” are creamy ones plus soft camel and buttercream.

Gold is much more flattering for her than silver, and she looks wonderful in rose gold and chocolate bronze.

She’ll be at her very best mixing her colors into outfits that don’t have too much light:dark contrast.  Her browns with peach accents and her navy with camel are examples of the level of contrast that showcases rather than overpowering her gentle coloring.

darker/stronger and the value contrast among her skin, hair and eyes is relatively small.  The deep, rich colors in her Color Fan are an obvious balance.  Can you see how too-light or too-bright colors would pull all the attention to the color itself and away from Kim’s face?

Black is a great neutral for Kim, because it repeats the color of her hair.  It’s part of her personal color pattern.  But the traditional black/white combo is far too high-contrast and over-balances her face. The black and tan option is less  distracting, but see how the mix of deeper tones in the third (bottom) panel is even better, showcasing her pretty face and also making her natural cheek and lip color appear richer.

Her “white” – the palest color she would wear effectively – is actually a brown-y blush color that is a closely related to her skin color.

Many of her fashion colors are so deep that they could also function as near-neutrals.  Monochromatic outfits – combining the darkest and lightest values of the same color strip – is one easy mix/match strategy for Kim. Or she could combine one of those dark fashion colors with her brown-y blush, her actual skin color  or with a lighter pick from a different color strip.

For example, her darkest hunter green could coordinate with the lightest color from its neighboring teal/aqua strip or  with her skin color.  Either of those slightly unexpected pairings would look most connected if Kim added a necklace or scarf that contained both colors.

Because she isn’t strongly warm or cool, a gold/silver mix is a balanced metallic choice.  And she also looks wonderful in jewelry of chocolate bronze because of the way it repeats her skin color.

If you have swatches from a color consultation, hold them us next to your face and look in the mirror.  Do you see an obvious connection between those colors and you?  If not, it may be time for a color update.